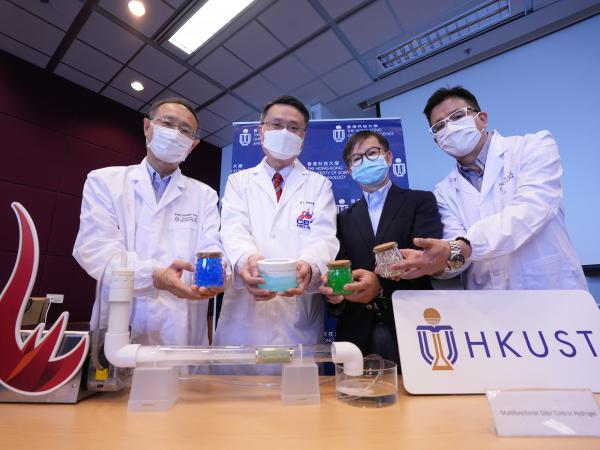 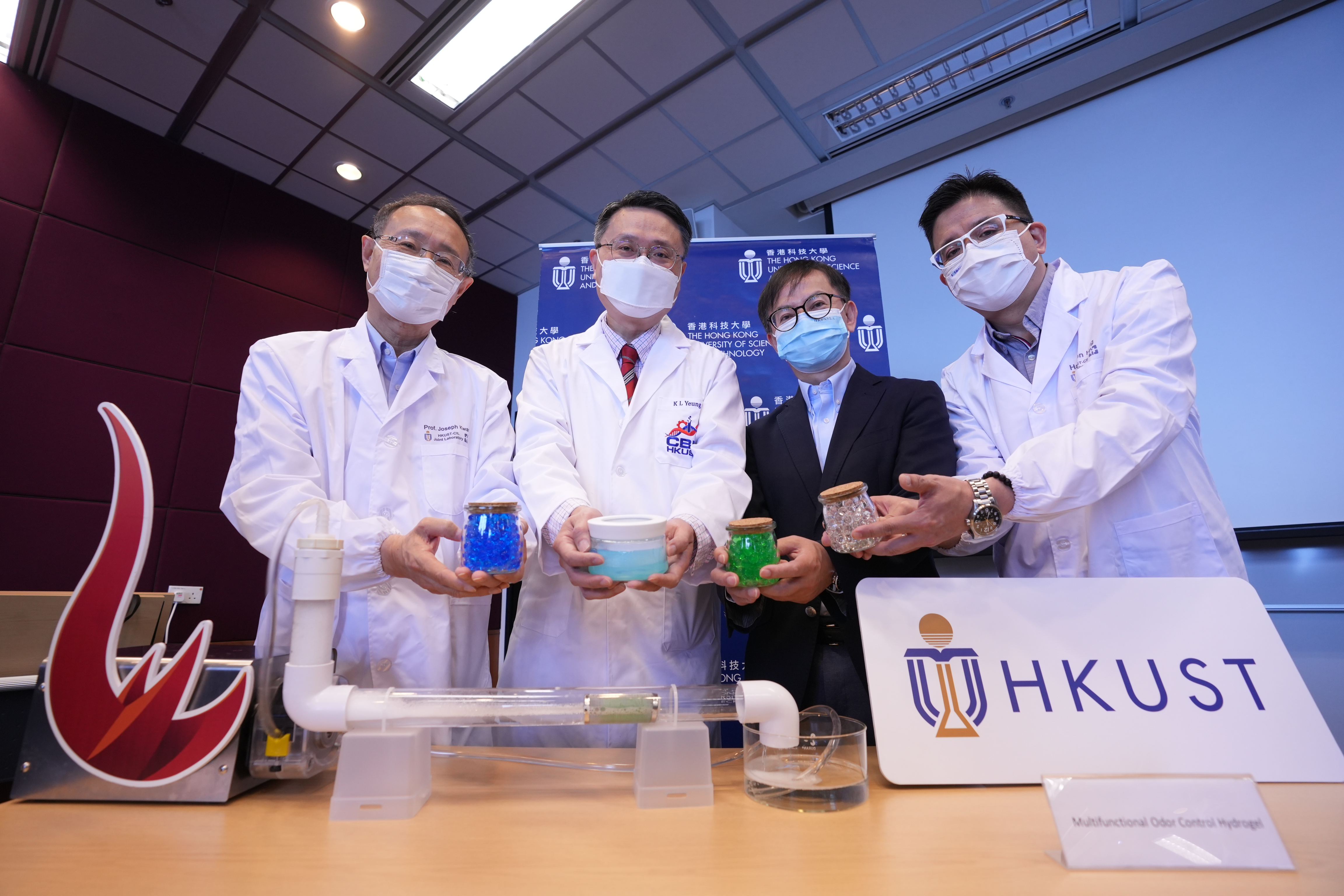 (From left) A group photo of Prof. Joseph Kwan, Adjunct Professor of Division of Environment and Sustainability (ENVR) and Chairman of Board of Directors of Haven of Hope Christian Service (HOHCS); Prof. YEUNG King-Lun, Professor at HKUST’s Department of Chemical and Biological Engineering and ENVR; Dr. David CHUNG, Under Secretary for Innovation and Technology; and Mr. Hamilton HUNG, Chief Marketing Officer of Chiaphua Industries Limited, holding different formulas of MOC hydrogel and AMGel (light blue bottle). 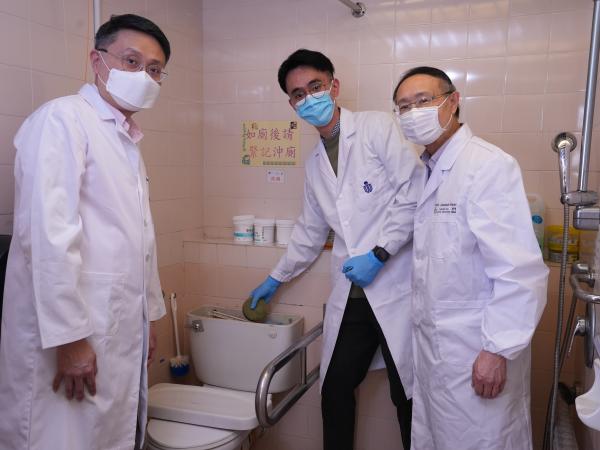 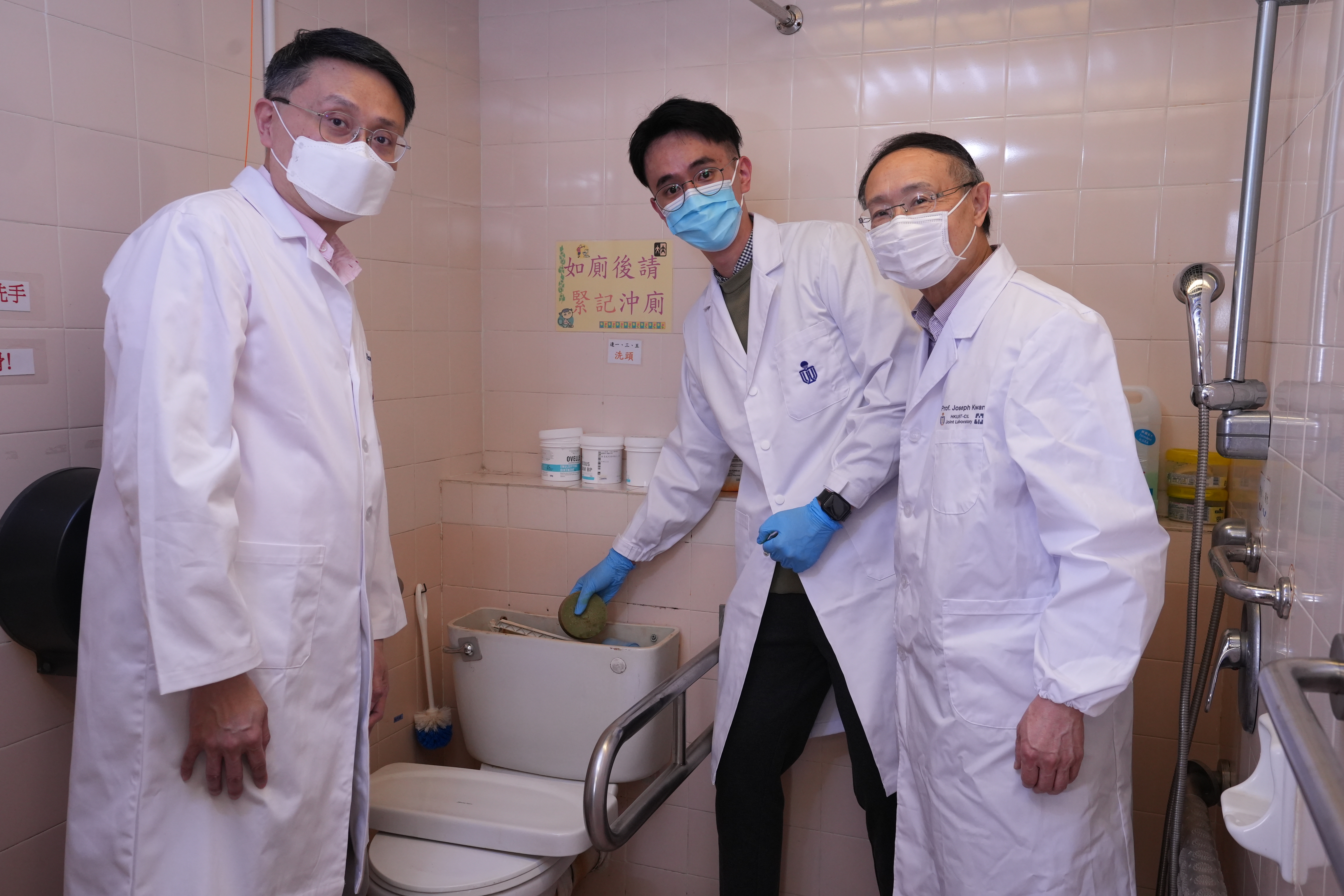 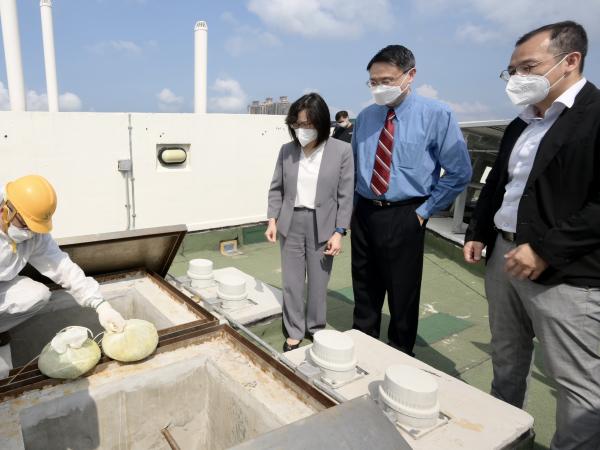 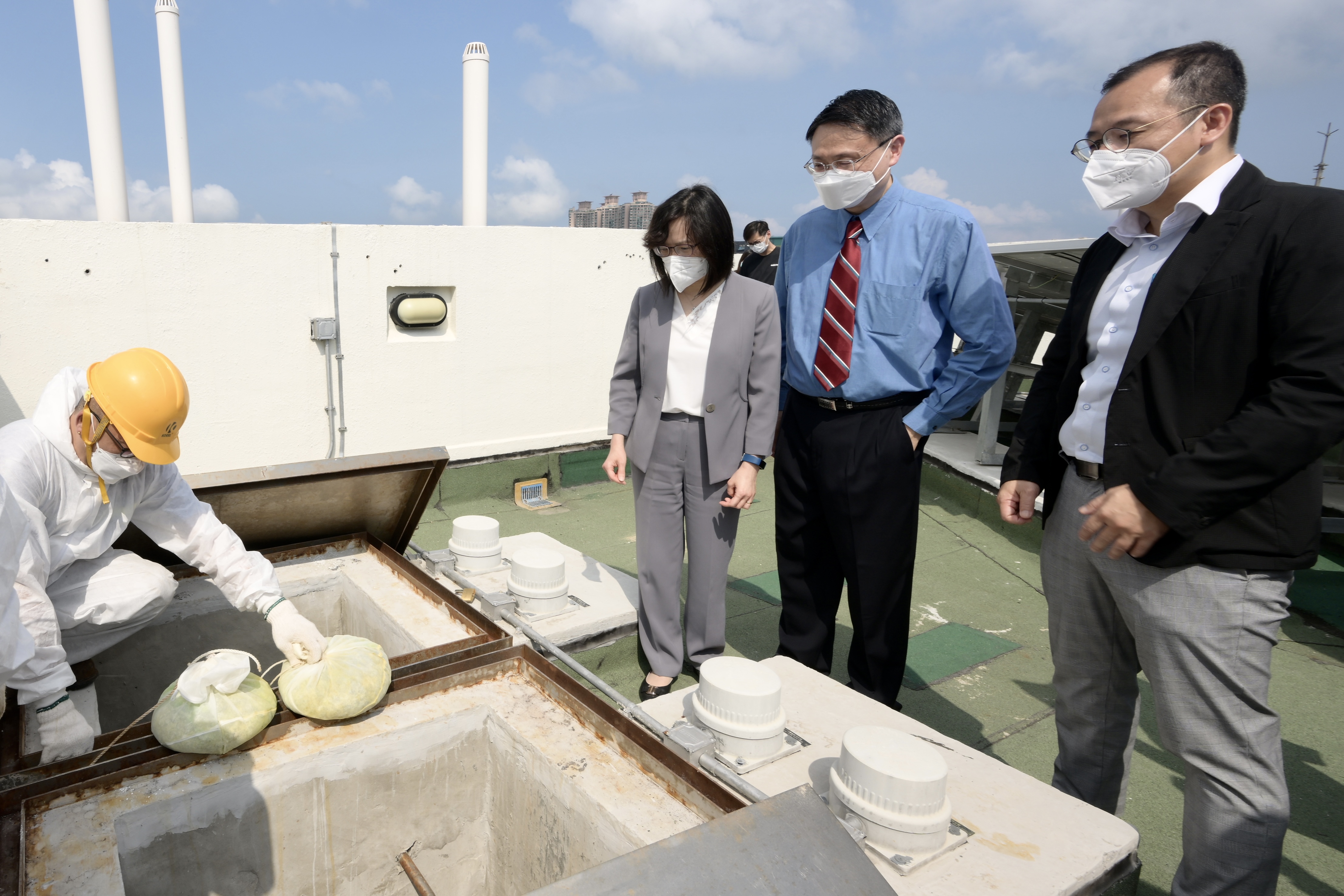 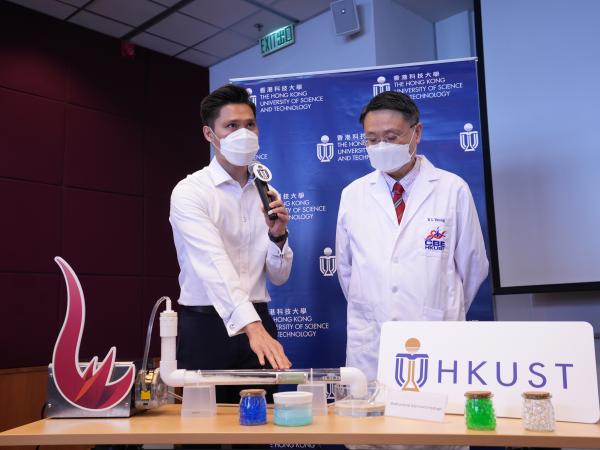 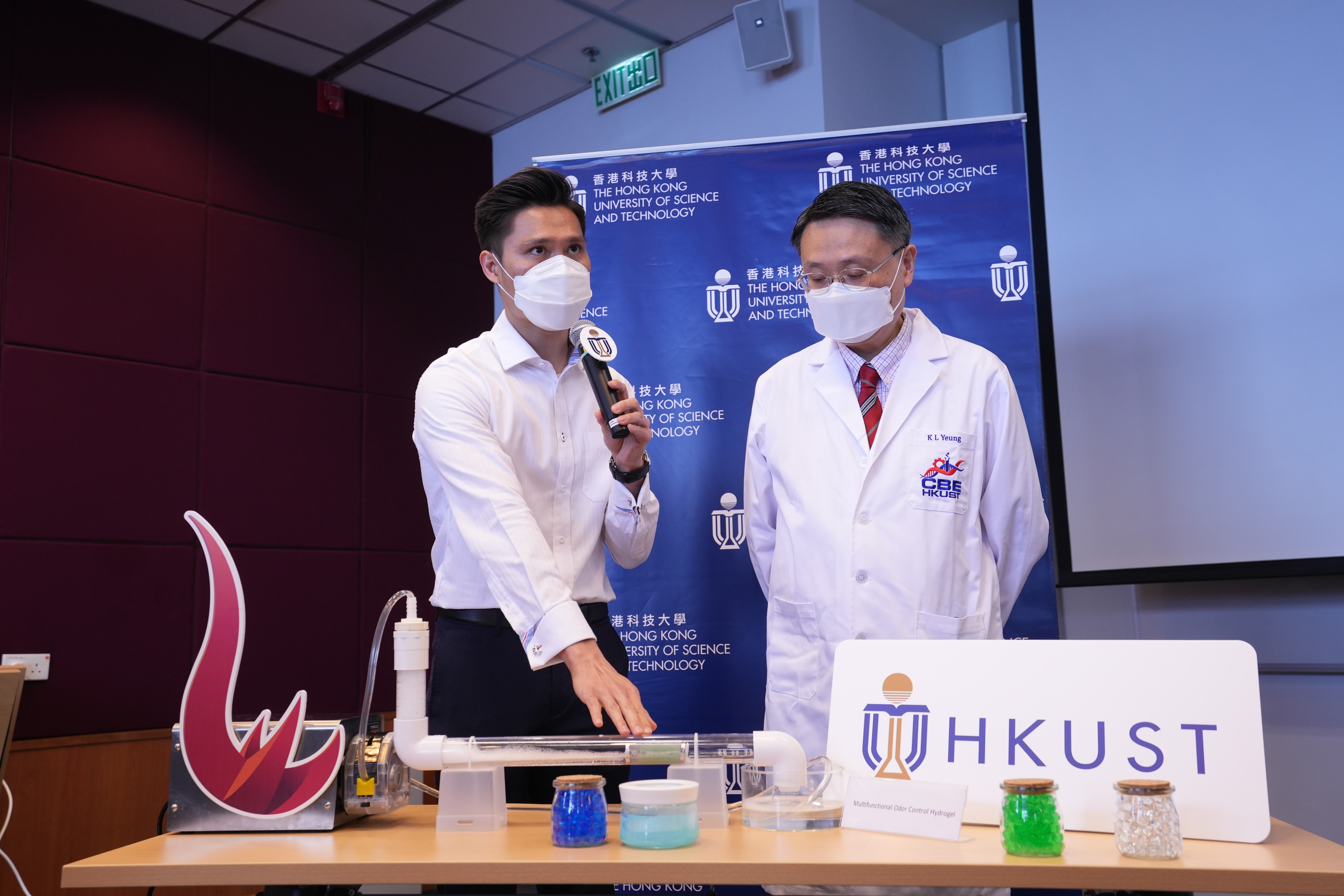 The research team simulated the use of hydrogel in drainage pipes.

Researchers at The Hong Kong University of Science and Technology (HKUST) have new technology to treat odors and germs in drainage and flush water. The MalOdor-Control (MOC) hydrogel is proven effective in treating odor problems at drainage locations, including manholes, nullah, intercepts, water channels, and rivers in Hong Kong. It worked by killing odor-causing microbes and preventing emissions of odorous gases.  Meanwhile, the new hydrogel formula AntiMicrobial hydroGel (AMGel) disinfects flush water of bacteria and viruses, including the SARS-CoV-2 Omicron strain as well.

Funded by the Innovation and Technology Commission (ITC), the HKUST team has been working in collaboration with the Drainage Services Department (DSD) since 2016 on applying the technology at different drainage sites.  The MOC hydrogel can effectively suppress 99% of hydrogen sulfide (H2S), 80-90% of Volatile Organic Compounds (VOCs) produced by microbes and 80-90% of sulfate reducing bacteria (SRB) - all common sources of malodor, at drainage facilities including promenades alongside Victoria Harbour, where malodor is a concern to the local community.

Developed by a research team led by Prof. Yeung King-Lun from the Department of Chemical and Biological Engineering and the Division of Environment and Sustainability at HKUST, the multifunctional hydrogel can be tailored to treat different odor problems and microbial contaminations in harsh environment in an efficient and safe manner.

Dr. David CHUNG, Under Secretary for Innovation and Technology, said, “The achievements of the HKUST in scientific research win acclaim and recognition. We are glad to see I&T inventions developed by local universities being adopted by local communities and help improve people's livelihood. The Innovation and Technology Commission launched the "Public Sector Trial Scheme" in 2011 to subsidize R&D outcomes for trial use in public sector organizations and government departments. The Scheme can also match suitable technology products or solutions with public sector organizations or government departments, and promote a wider use of I&T and create a win-win situation. The Government will continue to play the role of promotor and facilitator, assisting R&D institutions to commercialize scientific research results through different policies and funding schemes.”

Prof. Yeung said the MOC hydrogel provides an inexpensive but effective solution to odor problems. It is also safe, eco-friendly, sustainable and could complement and enhance traditional practices. “Apart from killing the odor-causing microorganisms and inhibiting their ability to generate odorous gases, MOC hydrogel can reduce corrosion to the pipes and antibiotic-resistant bacteria found in drainage as shown by studies.” Prof. Yeung said, “Moreover, the hydrogel will decompose into sand upon release of disinfectants so it will not cause any harm to the environment.”

The MOC hydrogel has won silver medal at the 2022 Special Edition of the Geneva International Exhibition of Inventions.

Prof. Yeung added that the technology has an enormous potential and can be utilized not only in drainage and flushing systems, but also other odorous places such as waste treatment and handling facilities, landfills, or wet markets.

The latest hydrogel formula - AMGel is now being trialed in the building flush water tanks for 2,880 flats at three public housing blocks in collaboration with the Housing Authority, as well as an elderly home of the Haven of Hope Christian Service under the Public Sector Trial Scheme of ITC.  With the support from HKUST’s industrial partner Chiaphua Industries Limited (CIL), the AMGel is also set to be applied to the flush water systems in primary/ secondary schools as well as subdivided flats in Sham Shui Po.

The new formula is proven effective in killing 95% of antimicrobial-resistant bacteria and over 99% of viral particles including MS2 and T3 bacteriophage - standard virus surrogates for viral inactivation screening. Moreover, a UK P3 laboratory has proven that AMGel can kill 99% of the Omicron, the Covid-19 strain that recently caused the fifth wave of Covid-19 outbreak. 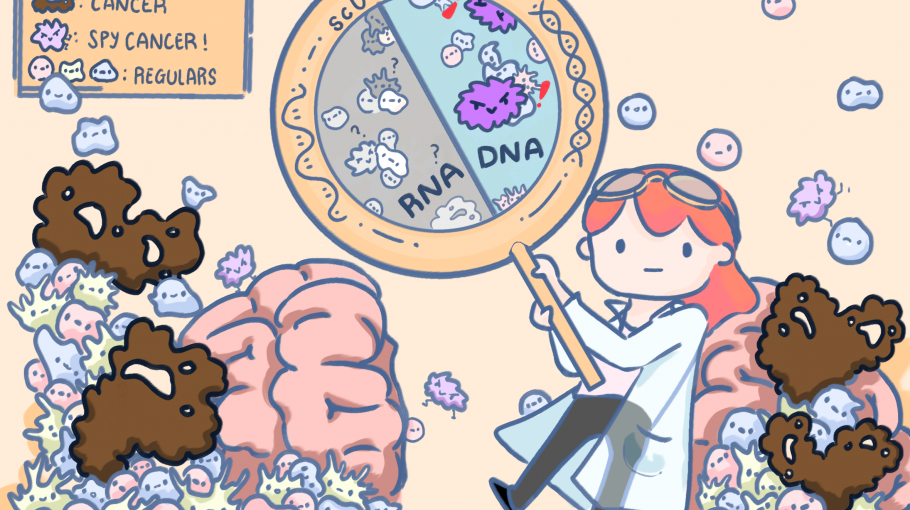