Two engineering students at the Hong Kong University of Science and Technology (HKUST) – Mr Frank WANG and Mr Jianyu SONG – have succeeded in putting their self-designed unmanned helicopter on an unprecedented autonomous flight across the world’s deepest canyon – the Yarlung Zangbo Grand Canyon, dubbed “the last territory of mystery on earth”.

Situated in Tibet, the Yarlung Zangbo Grand Canyon is the deepest canyon in the world, measuring 504.6 km long and 6,009 meters deep at the lowest spot, which is nearly three times the depth of the famous Grand Canyon in the US. Due to its great depth, it encompasses as many as 9 natural zones, from snowy mountains to rain forests. Due to its forbidding terrain, most of the areas have never been traversed.

This pilot flight represents another breakthrough after the unmanned helicopter’s flight up to Mount Everest last year, organized by students of HKUST’s Electronic and Computer Engineering Department under the guidance of their professor – Prof Zexiang Li. The unmanned helicopter differs from its predecessors in that it is equipped with an intelligent tracking system that enables the user to adjust its route during the flight. The challenge this time is to ensure that the helicopter executes its designated tasks and returns to the starting point despite the loss of wireless and global positioning signals. This is an unprecedented feat.

Another feat achieved on this flight is that the helicopter is equipped with the world’s most compact automated piloting system that is available on the market.

Mr Frank Wang said, “As the topography of the canyon is very complex, there are numerous blind spots on the flight path. The design of our helicopter is such that in the event that the signals are lost, the helicopter will automatically fly back to its starting point, 30 meters above ground. In this condition, we can easily control the helicopter manually to make a safe and smooth landing. This will insure the helicopter against crashing due to loss of signals, resulting in a threat to human life and loss of equipment.”

Mr Jianyu Song said, “The design of our control system is much more advanced than the model, and the size is much lighter too. Apart from being visually more attractive, we can spare more space for the installation of other equipment.”

Back in May 2008, HKUST’s unmanned helicopter was brought to Sichuan immediately after the earthquake and flew to regions that were too dangerous for manned helicopters, and took surveillance photos in support of post-disaster restoration by the authorities. 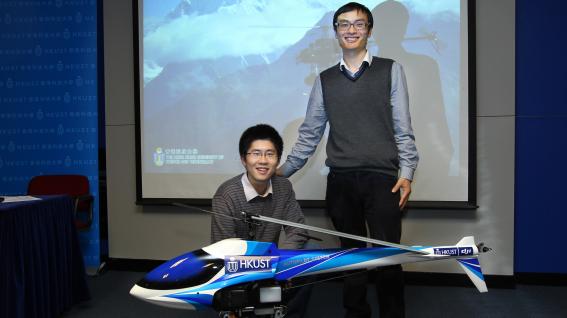 Frank Wang (right) and Jianyu Song with their helicopter 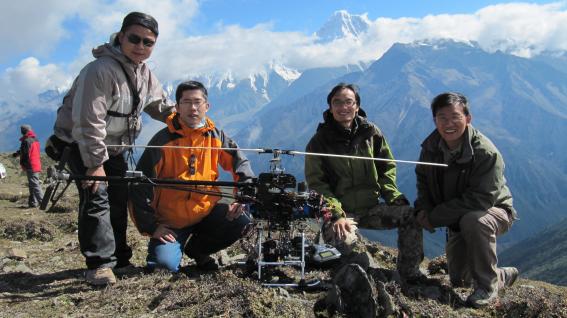 The core team for the test flight: (from right) Prof Zexiang Li, Frank Wang, Jianyu Song and a technician. 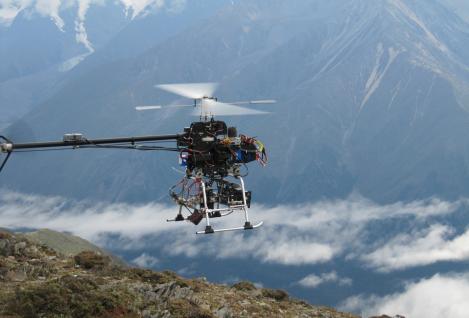 The unmanned helicopter hovering above the Yarlung Zangbo Grand Canyon 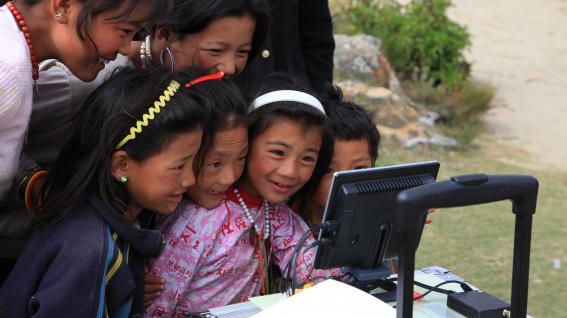