A research team from the Hong Kong University of Science and Technology (HKUST) has discovered a method that would allow the production of a new type of spherical molecules not easily obtainable before.  Preliminary testing has also shown that such molecules – chiral tetraarylmethanes (CTAMs), display good deterrent effects against cancer cells such as those of cervical, lung, breast and colorectal, as well as the virus causing the Hand, Foot and Mouth disease (HFMD) and a type of coronavirus.

According to the preliminary biological activity study, the spherical chiral molecules produced by this new method possess anti-cancer and anti-viral qualities. One molecule, for instance, demonstrated inhibiting effect against HeLa cells (cervical cancer cells) comparable to that of Doxorubicin – a common deterrent against the growth of such cells, but with a toxicity level 28 times lower1 , indicating that such spherical chiral molecules could be used to develop cancer treatments with fewer side effects.

The molecules are also found effective against enterovirus A71 – the culprit behind HFMD, which is still incurable by medicine as of today2.  Upon application of the spherical molecule at low concentration, the amount of virus yield fell by up to 121 folds.  The molecules can also inhibit the replication of a common cold virus called OC43.  Since it is a human beta-coronavirus, there is a high chance that such spherical molecules may also be effective against other coronaviruses, such as SAR-CoV-2 that causes the Covid-19 pandemic. 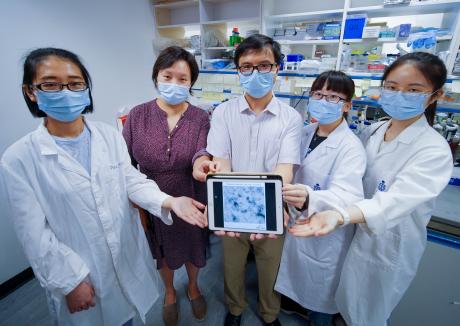 Over half of the approved drugs currently used belong to the chiral drug family, but almost all are linear and disc-shaped types of molecules. The other type - spherical molecules – exemplified by CTAM, was underutilized due to the difficulties in synthesizing them. One of the challenges involves the need to overcome a substantial energy barrier in bonding the four different aryl groups inside the molecule around a small carbon atom (see the molecule’s structure as shown on the right), another challenge is that the bond must be made in a specific 3D orientation.

Now, a team led by Prof. SUN Jianwei, Professor of the Department of Chemistry at HKUST, managed to overcome the problems by using a tagging strategy.

“Synthesizing CTAM is like finding and connecting a small kid surrounded by three giants among a sea of people to another giant, and it’s immensely difficult to put the fourth giant in place.  What we proposed here is to use the tags we implanted on the existing aryl groups to spot and direct the fourth one in approaching the middle carbon via a specific route,” Prof. Sun said. “Chiral spherical molecules have long been an overlooked domain, we hope our discovery would pave the way for another dimension of drug development.” 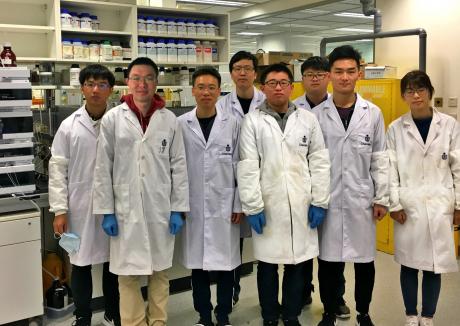 The findings were published in Nature Catalysis, see also the finding’s publication in EurekAlert!.

1 This was compared with the toxicity of Doxorubicin toward MRC-5, a normal cells in the lung tissue

2  According to the Centre for Health Protection, there is no specific drug treatment for Hand, Food and Mouth Disease

About The Hong Kong University of Science and Technology
The Hong Kong University of Science and Technology (HKUST) (https://hkust.edu.hk/) is a world-class research intensive university that focuses on science, technology and business as well as humanities and social science.  HKUST offers an international campus, and a holistic and interdisciplinary pedagogy to nurture well-rounded graduates with global vision, a strong entrepreneurial spirit and innovative thinking.  HKUST attained the highest proportion of internationally excellent research work in the Research Assessment Exercise 2014 of Hong Kong’s University Grants Committee, and is ranked as the world’s best young university in Times Higher Education’s Young University Rankings 2020.  Its graduates were ranked 26th worldwide and among the best from universities from Asia in Global University Employability Survey 2020. 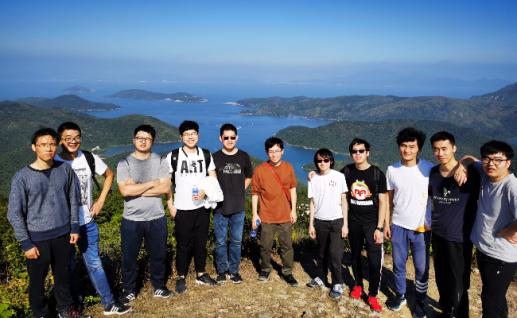