(This article was originally published on EurekAlert! on June 17, 2022) 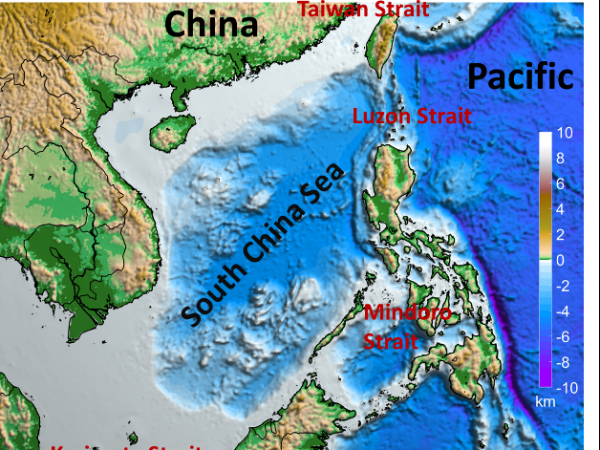 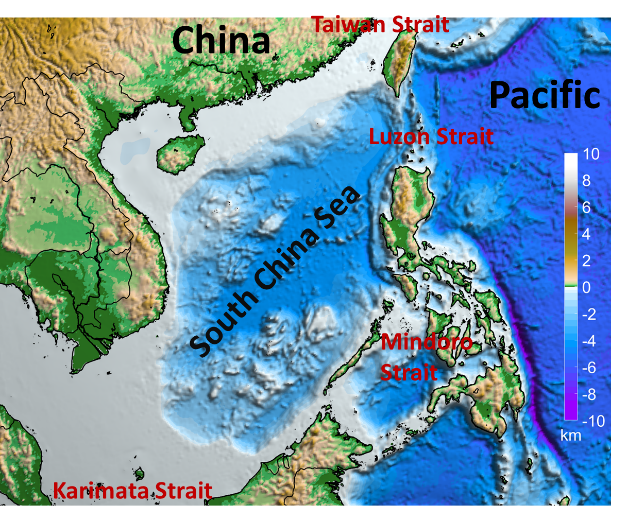 Geographical location and bathymetry of the South China Sea. 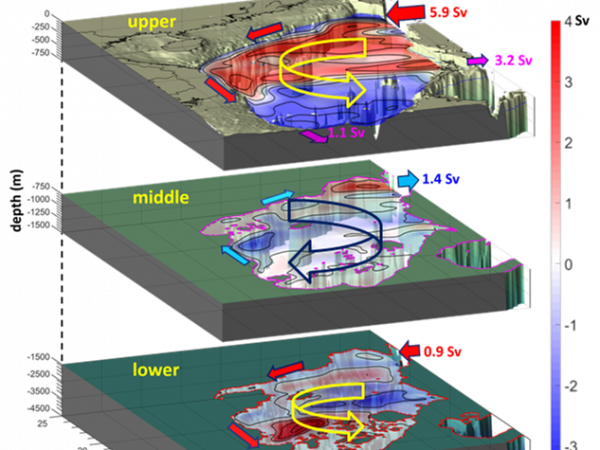 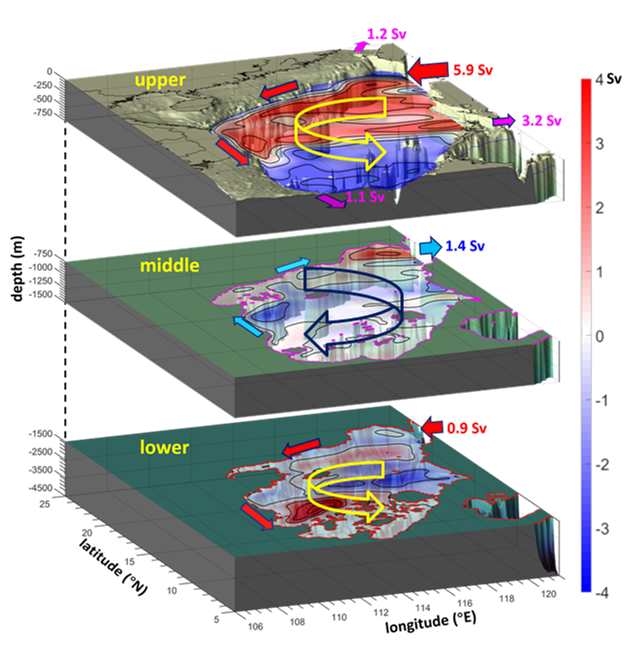 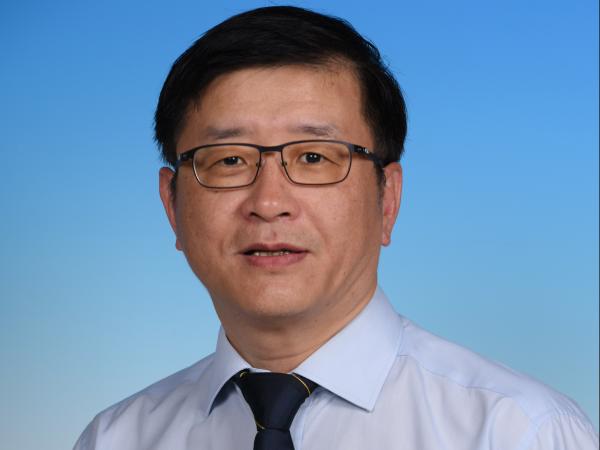 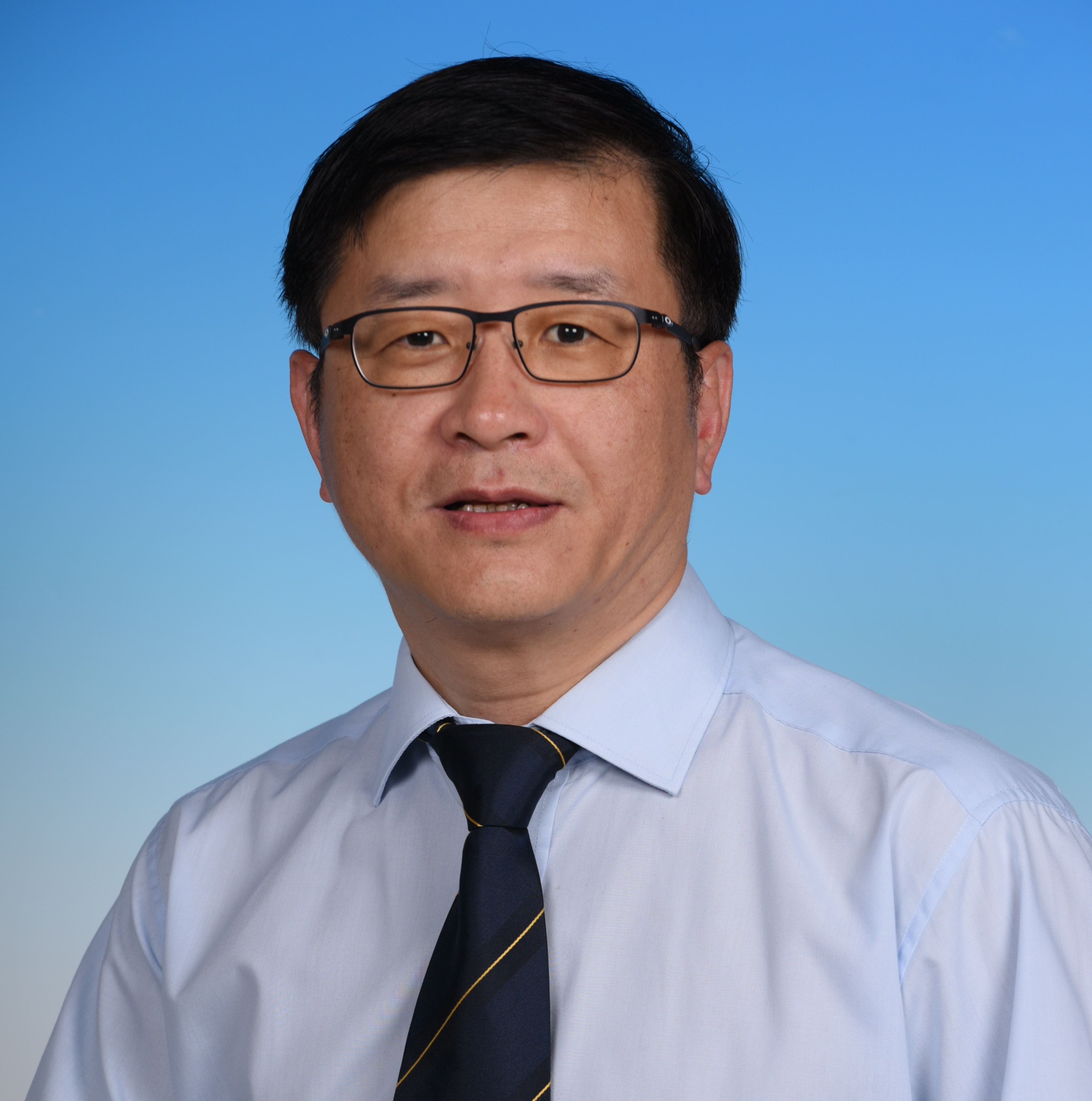 A research team led by Prof. GAN Jianping, director of the Center for Ocean Research Hong Kong and Macau (CORE) at The Hong Kong University of Science and Technology (HKUST), carried out field observations and conducted numerical simulations in the South China Sea (SCS) recently and revealed the never-before-seen characteristics of the three-dimensional ocean motion in the SCS through geophysical fluid dynamic theory. The complex ocean circulation system controls the energy conversion and water mass transport in the SCS, subsequently affects the biogeochemical processes, carbon budget, marine ecological environment health, regional climate change, and the sustainable economic and social development in surrounding countries and regions, which accounts for about 22% of the world's population. Studies on the SCS circulation and dynamics are regarded as the foundation and epitome of understanding the SCS.

In the past few decades, there has been growing global attention to ocean circulation research in the SCS. However, scientific understanding of the three-dimensional water movement in this region is still very limited, ambiguous, and sometimes even misunderstood. This is caused by the lack of observations, reliable numerical model, and the knowledge of the complicated physical processes in the SCS circulation.

Until recently, based on observations, numerical simulations, and geophysical fluid dynamics reasoning, a research team led by Prof. Gan, who is also Chair Professor at HKUST’s Department of Ocean Science and Department of Mathematics, validated that the SCS rotating circulation has a three-layered structure, where currents rotate counterclockwise, clockwise and clockwise in the upper, middle and bottom layers, respectively. The study also found that the three-layered rotating circulations are composed of the dynamically active ‘hotspots’ of intensified currents along the steep continental slope surrounding the deep basin, instead of an orderly structure in the entire region as previously conceived. Slope currents are mainly controlled by the combination effects of monsoon, Kuroshio intrusion, and the unique topography, and are constantly adjusted and regulated by the multiscale oceanic processes. The study demonstrated the three-dimensional structure and physical mechanism of the SCS circulation for the first time, and clarified previous misunderstanding of the water mass motion in this region. Based on these findings, Prof. Gan's team created the WavyOcean, a 3D simulation and visualization system for ocean circulation and biogeochemical processes in the SCS, which is validated and constrained by both observations and dynamics reasoning.

Prof. Gan said, "Because of  failure in capturing the dynamic 'hotspot' in the marginal sea, almost all global models cannot accurately simulate the three-layer circulation structure and related physics in the South China Sea, even with the same spatial and temporal resolution. Therefore, compared with the open ocean, our understanding and simulation of the global marginal sea circulations, forced by multiple factors such as seafloor topography, water exchange through straits, and multi-scale dynamic processes, is more challenging than expected.”

"Observation is essential to ocean research. However, due to the strict spatial and temporal limitations of in-situ observations, it’s very difficult to understand the structure of ocean currents, especially for theoretical analysis of circulation dynamics. Numerical experiments or simulated 'observations' are crucial to ocean research, and an increasing amount of novel discoveries in ocean is now relying on numerical model that is rigorously validated by observations and geodynamic theory," he added. As an expert in computational geophysical fluid dynamics, Prof. Gan believes that numerical simulation is not a coding game of mere input and output, but rather a process of constructing an "exquisite" scientific numerical experiment and observation. In addition to simulating and forecasting the real ocean, numerical ocean modeling is a major scientific tool for understanding ocean processes and phenomena and assisting in exploring the unknowns.