Mr Wang Shi delivered a speech titled “Choosing Your Own Path” on how he founded Vanke, and how he drew a line in the sand by insisting on high moral business values. He also spoke on his passion for outdoor sports, especially mountain climbing, and how this sport made him realize the impact of global warming and led Vanke to choose the green path as its development strategy. An avid learner and a seasoned decision maker, Mr Wang shared his experience on leaving his comfort zone of business to study overseas, and how he learnt to make tough decisions on what to leave behind, and what to bring forward through Deep Dive initiatives.

In the talk, Mr Wang said HKUST has developed into a leading university not just in Asia but also the rest of the world over a short history of 25 years. Recounting his time giving lectures to EMBA, he talked about how the experience gave him the idea to study abroad, and how he began his teaching career ever since, giving lectures at top universities around the world.

Mr Wang added although China has opened up for 30 years, it still has a lot to learn from Hong Kong on areas such as the rule of law, finance, free trade and urban planning.  At the same time, Hong Kong’s economy is in a transitional period and China, with its robust development, can offer the city many opportunities. He urged Hong Kong people to seize these chances.  He also visited the HKUST Water Sports Center and shared his rowing experience with the students.

Mr Wang worked in the Water and Electrical Supply Department of Zhengzhou Railway in 1970s, and graduated from Lanzhou Railway College in 1978 majoring in water supply studies. After graduation, he had worked for Guangzhou Railway Bureau, Foreign Trade and Economic Cooperation Committee of Guangdong Province, and Shenzhen Special Region Development Company. In 1984, he established “Shenzhen Exhibition Centre for Modern Science and Education Equipment”, the predecessor of China Vanke. He became chairman and general manager of China Vanke Co. Ltd. in 1988.

China Vanke Co., Ltd. is a Chinese leader in real-estate, and its businesses mainly include real-estate development and property service. Adopting a strategy of focusing its development in urban or metropolitan areas, Vanke established its presence in 65 cities in Mainland China up to 2014. Since 2013, it has attempted overseas investments and is currently involved in six real-estate development projects in Hong Kong, Singapore, Los Angeles, and New York City. Its 2014 sales amounted to RMB215.13 billion, making it an industry leader globally in terms of sales.

Mr Wang Shi is among Nobel Prize winners, corporate leaders, entrepreneurs and key financial policy shapers invited to speak in the Distinguished Speakers Series that marks HKUST’s 25th anniversary. The next speaker is Prof Dan Shechtman, Nobel Laureate in Chemistry in 2011, who will give talk on 26 October, 2015. Other confirmed speakers include Prof Zhong Lin Wang, Hightower Chair in Materials Science and Engineering and Regents' Professor at Georgia Institute of Technology, and Dr Raghuram Govind Rajan, Governor of the Reserve Bank of India. More talks are also being lined up. 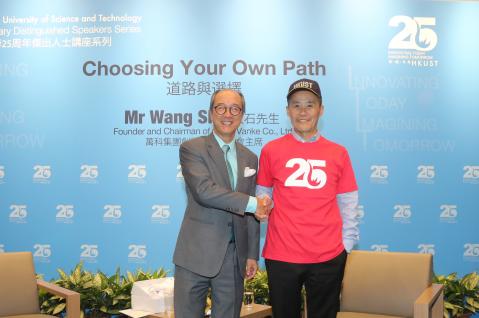 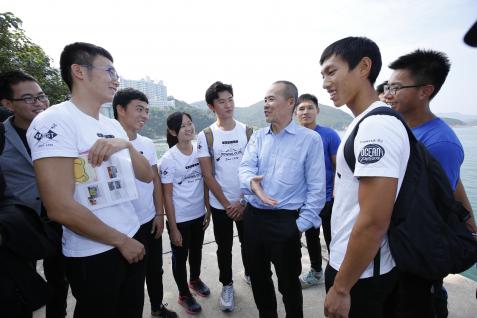