A computer scientist at the Hong Kong University of Science and Technology (HKUST) Prof Pedro Sander has worked with a team of researchers to develop the world’s largest digital photograph.

This photograph, depicting the city of Rio de Janeiro, Brazil, has a resolution of 150 billion pixels. It is the result of using cutting-edge technology to stitch together 11,000 photographs each of 18 megapixels. If printed in very high quality it would occupy the size of a football field, and if printed in standard acceptable quality it would have at lease twice that size.

The researchers used a GigaPan robotic arm to position and take the photographs from The Sugar Loaf – a landmark in Rio de Janeiro – and the entire process took about 4 hours. The stitching process was challenging due to the large amount of data processing involved. Many stitching solutions were attempted in order to reduce the seam artifacts across images and the final process took several weeks. It took another full week just to upload the picture to the website over the Internet.

The project was led by Prof Sander, Assistant Professor in the Department of Computer Science and Engineering, HKUST and researchers Dr Diego Nehab and Dr Luiz Velho from the Instituto Nacional de Matematica Pura e Aplicada (IMPA), in Rio de Janeiro – a leading research institute promoting high-level scientific research in Mathematics and its applications. The stitching operation was managed by Mr Rodolfo Lima, a graduate student at IMPA.

Involving future scientists in the image processing
During the last summer break, Prof Ajay Joneja of the Department of Industrial Engineering and Logistics Management co-advised, along with Prof Sander, two local secondary school students on a project to improve the quality of the 67 billion-pixel photo. Since it is a very challenging to operate efficiently on such a high-resolution image, students Luk Kevin Rachim and Lee Chun Hin from The Chinese Foundation Secondary School worked on a low resolution manageable version of the image using a standard image editor. Prof Sander developed a software to automatically upsample these changes to the 67 billion-pixel image, improving its final quality. The team is now working on the 150 billion-pixel image and is now researching on tools to better process these images and remove artifacts caused by the stitching process.

Testing the Limits; Exciting Applications
Prof Sander said, “We are naturally very excited about setting a world record. In fact, this is the first step in our research on capturing and analyzing giant photographs. We were mainly testing the limits of the hardware and software, and the limits of resolution – to see how much actual detail can be captured from a single location. We were certainly impressed by the potential.”

“There are numerous exciting applications in a wide range of fields, such as tourism, heritage preservation, scientific research, medicine and astronomy. For instance, an annotated image can be used for tourists to navigate through potential tourist destinations. Scientists have used these techniques to create highly detailed images of tiny insects and even detailed representations of the human body. On the opposite end of the spectrum, similar techniques have been used to produce high resolution images of the universe using images taken from telescopes,” he added.

At HKUST, Prof Sander and his fellow researchers are also investigating how to map such gigantic images to 3D model representations of a landmark, such as the Big Buddha in Hong Kong. Using a few of these gigantic images, they hope to be able to make extremely accurate 3D representations of these objects. The digitalization of these landmarks is an important approach for the preservation of cultural heritage.

This was not the first time Prof Sander and his co-researchers broke a world record. In July this year they produced and uploaded a giant photo – also of Rio de Janeiro but taken from the famous statue of Christ the Redeemer – measuring 67 billion pixels. This was a new world record at that time, but was subsequently broken by another team of researchers.

Prof Mounir Hamdi, Head of the Department of Computer Science and Engineering, said, “We are extremely proud of this record-breaking achievement, which testifies to our Department’s ranking as No.1 in the Far East, as well as our leadership in the academic arena. Indeed, it is truly exciting to set a world record twice in a year. This shows how competitive the digital world is, and how well we are doing at HKUST.”

About the HKUST Department of Computer Science and Engineering

As the University’s largest academic department, the Department of Computer Science and Engineering aims to produce highly qualified and well rounded graduates who can provide leadership and service to Hong Kong, the Mainland, and the world. It also endeavors to pursue creative research and new technologies across disciplines to serve the needs of industry, Government, society, and the scientific community. It also aims to develop strong partnerships with industrial and government agencies, professional societies, and local communities.

Prof Sander is an Assistant Professor in the Department of Computer Science and Engineering at HKUST. He received his PhD from Harvard University in 2003, and joined HKUST in 2006. His research interests include computer graphics, real-time rendering, geometry processing, and graphics hardware. He is a native from Niteroi, Rio de Janeiro, Brazil. 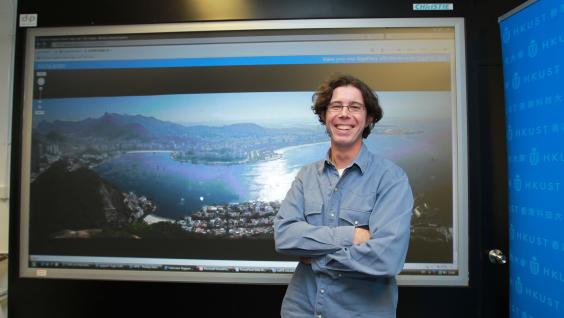 Prof Sander with his record-setting photo 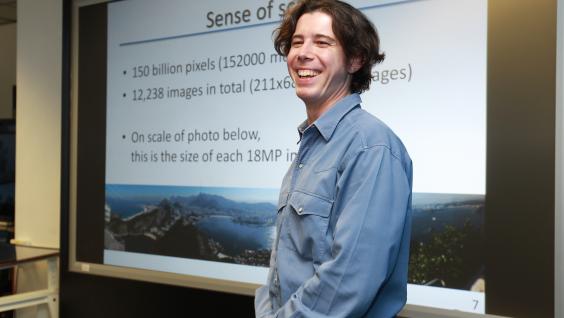 Prof Sander explaining the size of his photo 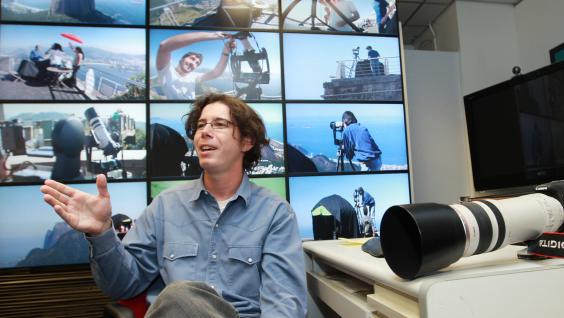 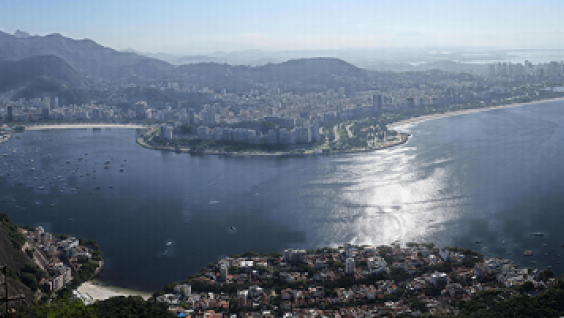