The Centre for Chinese Medicine R&D (CCM) of the Hong Kong University of Science and Technology (HKUST) has recently developed an advanced technology to extract effective liposoluble ingredients from traditional Chinese herbal recipe “Xiasangju”(夏桑菊) which has been proved effective in preventing flu virus and avian flu virus from entering body cells.

The agreement, which formalizes the sale of HKUST’s patented technology to XQP, will foster scientific research collaboration between Guangdong and Hong Kong in combating avian flu and common flu by using Chinese medicine.

Speaking at the ceremony, Prof Roland Chin said he was glad to see this new co-operative initiative between HKUST and XQP. It represents a perfect marriage of traditional Chinese medicine with the latest technology to break new grounds in combating disease.

Prof. Karl Tsim, Head of CCM at HKUST and the principal scientist of the project, noted that during the SARS period in 2003, CCM of HKUST had already started the scientific research on the curing effect of Chinese medicine on avian flu.

“Our research found that the ingredients of XingQun Xiasangju were effective in preventing influenza type A, type B and avian flu,.” He hoped that HKUST and XQP could co-develop a new agent based on Xiasangju for counteracting and preventive use against influenza viruses.

Also speaking at the ceremony, Chairman and General Manager of Guangzhou XingQun Pharmaceutical Company Ltd Mr Guang-feng Su said that it was the first time a leading international university and a well-known pharmaceutical enterprise in mainland China have joined hands in a project of such a nature. He was certain that this joint effort will result in fast-tracking the modernization and internationalization of Chinese medicine.

About Xing Qun Xiasangju
Xing Qun Xiasangju combines seltheal, mulberry leaves and chrysamthemum. It is a common “cooling tea” which relieves body aches and has detoxification benefits to the human body. It is now officially classified as part of the National Non-matter Cultural Heritage. 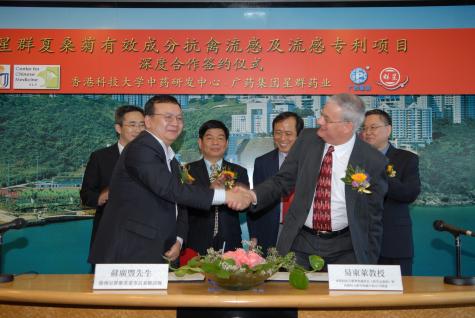