Professor Kwing-lam CHAN recently achieved breakthrough in analyzing the data obtained from China’s first lunar probe, Chang’e-1. He was invited by China National Space Administration (CNSA) to join the first Chinese lunar satellite research in 2007. The analysis result will be published in Earth and Planetary Science Letters and Prof Chan is the first Hong Kong scholar to publish Chang’e-1 data analysis results in an international journal.

In Hong Kong, including Prof Chan’s research team, there are four groups taking part in Chang’e-1 data analysis research. Chang’e-1 achieved the first 3-D lunar imaging in the world and used microwave to measure the thickness of lunar regolith. From the microwave data, Prof Chan found that there were microwave “black spots” spread over the lunar regolith, with great temperate difference between day and night. In addition, the microwave data confirmed that the temperature variation of the lunar regolith under dozens of centimeters was relatively small (around minus 48 degrees Celsius near the equator region, warmer than the winter of Alaska). Human beings can live under such temperatures.

Prof Chan believed that such findings will be of great help to China’s lunar landing in the future and predicted that Chinese astronauts would be able to land on the Moon in the coming two decades. He also pointed out that the rich reserve of Helium-3 on the moon was adequate for the our use for 10,000 years.

This research was solely funded by HKUST’s School of Science for HK$320,000 and the first stage of research was completed.

Prof Kwing-lam CHAN is a prominent astrophysics and was a former NASA researcher. He obtained his doctoral degree in Princeton University in 1974. His research interests include Astrophysics and Space Science, Solar, Planetary and Lunar Research, and Computational Fluid Dynamics. He joined HKUST in 1994 and is currently a professor in the Department of Mathematics. 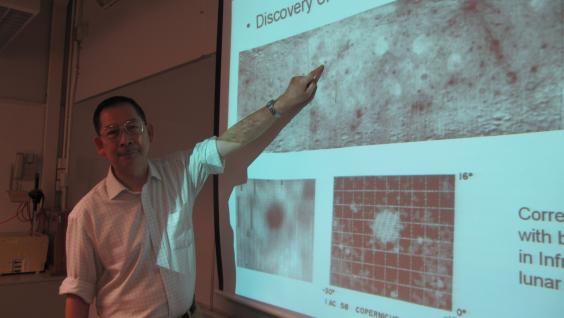